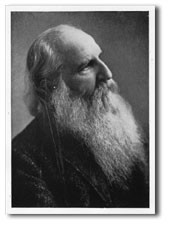 "I had spent the evening in a great city (London 1872), with two friends, reading and discussing poetry and philosophy. We parted at midnight. I had a long drive in a hansom to my lodging. My mind, deeply under the influence of the ideas, images, and emotions called up by the reading and talk, was calm and peaceful. I was in a state of quiet, almost passive enjoyment, not actually thinking, but letting ideas, images, and emotions flow of themselves, as it were, through my mind. All at once, without warning of any kind, I found myself wrapped in a flame-colored cloud. For an instant I thought of fire, an immense conflagration somewhere close by in that great city; the next, I knew that the fire was within myself. Directly afterward there came upon me a sense of exultation, of immense joyousness accompanied or immediately followed by an intellectual illumination impossible to describe. Among other things, I did not merely come to believe, but I saw that the universe is not composed of dead matter, but is, on the contrary, a living Presence; I became conscious in myself of eternal life. It was not a conviction that I would have eternal life, but a consciousness that I possessed eternal life then; I saw that all men are immortal; that the cosmic order is such that without any peradventure all things work together for the good of each and all; that the foundation principle of the world, of all the worlds, is what we call love, and that the happiness of each and all is in the long run absolutely certain. The vision lasted a few seconds and was gone; but the memory of it and the sense of the reality of what it taught has remained during the quarter of a century which has since elapsed. I knew that what the vision showed was true. I had attained to a point of view from which I saw that it must be true. That view, that conviction, I may say that consciousness, has never, even during periods of the deepest depression, been lost."

"Following the direction given in the borrowed book I, one evening tried to meditate on the concept "God". And suddenly, without knowing exactly how, I found myself in a condition that made me feel in the presence of something immensely sublime. Quite a small luminous point appeared in the distance. For a moment it disappeared, but shortly after became visible again, this time much nearer. I could now see that the light emanated from a Christ-like being, presenting itself in a dazzling white light, spangled with shades of blue. The light was so intense and vivid that it reminded me of those sparklers we used to put on Christmastrees. The sparks in my revelation, however, were diminutive in comparison, but in return much more numerous.

There was once more a pause, during which I found myself in complete darkness. But then the figure a new illuminated the plateau. I looked directly into a fiery figure. A Christ-like being of dazzling brightness now moved straight towards me, raising its arms as if about to embrace me. I was entirely paralyzed. Unable to make the slightest move, I gazed straight into the radiant being's diaphragm, now just outside of me and on a level with my eyes. But the figure kept closing in, and presently it entered my own flesh and blood. A sublime feeling thrilled me. The paralysis left me. The divine light, which had thus taken possession of me, enabled me to take a sweeping look throughout the world.

And lo! continents and oceans, cities and countries, mountains and valleys - all steeped in the light now emanating from my own mind. In this, white light the earth was transfigured into "the Kingdom of God".

The divine experience was over. I had once more before me my physical reality, the details of my room, the modesty of my position. But "the Kingdom of God" kept illuminating my brain and my nerves."

From Martinus' Book; The Road To Initiation